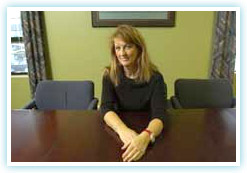 Monica Magnetti wants you to get out
of your metaphysical La-Z-boy chair and
live life to its full potential… or else.
Photo-Dan Toulgoet

Successful business people have them, and so do CEOs of international corporations. The wife of British prime minister Tony Blair consulted hers when picking out underwear for her husband, and Bill Gates has 10. No, not nipples-we’re talking about life coaches. One of the fastest growing industries in the vast world of self-help, life coaching might sound like a catch-all therapy to heal your psychological groin pull. But its purveyors claim they aren’t out to cure clients’ woes.

"I don’t give advice or fix people," says Vancouver-based life coach Monica Magnetti. "A life coach is someone who helps people find their own answers to their questions. It’s to force people into finding out how to live life at 100 per cent rather than 70 or 60. And if you already live your life at 100 per cent, then a coach will support you in staying there."

Certified with the Coaching Training Institute of California, Magnetti operates under the banner of Luna Coaching and even has pamphlets adorned with images of the moon that read "Illuminate Your Potential." If that’s not enough synergy for you, she’s also writing a book called Dancing in the Moonlight, about helping people "rock their boat" and "finding rhythm when the sun isn’t shining."

"I really like to push boundaries, I really like to push people," says Magnetti with a level of enthusiasm the Courier newsroom hasn’t seen since someone brought in a box of Krispy Kreme doughnuts last year. "And I always tell people, ‘You know what, if you don’t want to rock the boat, buy a La-Z-boy chair, and then stare at the ceiling in your living room and see how your career is improving, how your friends love you and see how your personal relationships work out.’ That’s what I do. I support people in rocking their boat, because that’s where passion and excitement is."

Born in Italy, Magnetti says she’s been an "unconscious life coach" her entire life, but it wasn’t until she was faced with chronic pain left by an injury and dissatisfaction with her job in the fashion industry that she decided to change her life’s path. She studied health, nutrition, something called "energy work" and hypnosis. Six years ago, she went back to university for her BFA-something she had always avoided.

"Halfway through your life, you start to tidy up loose ends," says the 48-year-old, who has between 10 to 20 clients at any given month. They range in age from 24 to 60, and come from all walks of life and all parts of the world.

Typically, clients meet with Magnetti for a sample session, and if they decide a life coach is for them, they set up a two-hour "intake session" where, together with Magnetti, they define their goals and intentions, what they want to achieve and how they’ll know when their goals have been reached. Subsequent sessions are half an hour a week, three times a month, usually by phone. Magnetti charges $220 for the intake session and $300 for the three half-hour sessions.

"The most common misconception is that if you have a life coach then there is something wrong with you, but it’s the other way around," says Magnetti, who’ll be giving 12 to 15 minute "mini-sessions" at her booth at the 14th Annual Wellness Show Feb. 3-5 at the Vancouver Convention and Exhibition Centre. "You hire a coach when everything is going well and you either want to keep it that way or you want to push it even farther. You hire a coach when you are a functional persona and still you are experiencing a breakdown in an area of your life."

For my sample session, Magnetti asks me a series of pointed questions that seem almost motherly, and we determine that lack of motivation and being more productive in my spare time is the area of my life I’d most like to improve. Or at least I think it is since any breakthrough I might have achieved is interrupted by the arrival of Courier photographer Dan Toulgoet, whose cellphone proceeds to go off.

"For all I know, you planned for Dan to arrive just when we were getting somewhere," says Magnetti. "We have to determine if what you’re saying is true to who you are."

Maybe she’s right. Besides, a 10-minute sample session is hardly enough time to get my unmotivated life in order, especially when I have a page of life coach-probing questions to get through. Does Magnetti have her own life coach? Yes. Mostly to help her meet her goals concerning her business, but since all areas of life are apparently connected, her sessions also veer into her personal life. Would I have to do any sit-ups if I became her client? No, but she’d hold me accountable on finding a trainer if that was my goal. Has she ever seen the sitcom Coach staring Craig T. Nelson and Jerry Van Dyke? No, but she’d like to.

At the end of our meeting, Magnetti says she’ll email me regarding setting up a "real" session. I tell her I’m not so sure. "You might want to think about getting rid of that metaphysical La-Z-boy chair," she says ominously before leaving.

I might just do that. If I ever get motivated enough.

Do you have an interesting or unusual job you’d like to share with the Courier? If so, email mkissinger@vancourier.com.