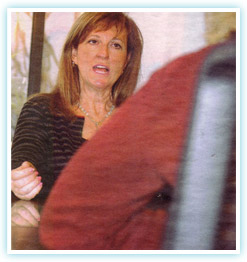 Monica Magnetti works with people in order to help them achieve their goals. The Italian-born Magnetti is a life and wellness coach.

A life coach helps clients determine the necessary steps in order to achieve their goals, and to help them live richer and healthier lives, says Magnetti.

"What’s wonderful about coaching is there is no formula. It’s about you… It’s about getting the most out of life," says Magnetti, who has a bachelor of fine arts degree in creative writing from the University of British Columbia and is a professional certified coach with the Coaches Training Institute in California.

Founded in 1992, CTI is an educational institution that offers training for coaches. To become certified, one must complete a six-month program, which includes hands-on coaching, group work, and one-on-one supervision of actual coaching sessions. Following that, a written and oral exam is taken. According to the CTI, the coaching curriculum is accredited by the International Coach Federation and is licensed by the California Bureau of Private Postsecondary and Vocational Education.

Magnetti says she has been a life coach for about one year and her current clientele varies from 10 to 20 people.

Magnetti says that as a life coach she builds an alliance or a partnership with individuals to help people achieve success and fulfillment in their work and life. Their job is to act as facilitators to help clients follow through on their goals.

Initially, Magnetti has an intake session with her client. It lasts about two hours and during that time the client’s goals and steps needed to take to reach those goals are determined.

She then tailors the steps that will be necessary to achieve goals, such as career satisfaction and/ or a healthier lifestyle.

Magnetti sets up deadlines to hold clients accountable in order to achieve their goals.

Following the intake session, regular 30-minute coaching sessions are held three times per month, most of which are conducted over the telephone.

A big advantage of conducting coaching sessions over the telephone is that it saves time and clients don’t have to worry about commuting to appointments, Magnetti says.

During the 30-minute coaching sessions, the client does most of the talking, says Magnetti.

"Right at the beginning of the session I would ask, ‘What’s up for coaching today?’ Not: ‘what do you want to talk about?’ and then we would go from there." She says she typically targets her coaching to what the clients’ goals are.

Many of her clients are overachievers

Magnetti says she finds that people, in general, need to be pushed and motivated into doing or into being.

For example, someone who is a procrastinator may put more attention into the doing and would prefer a plan of action where the action steps are outlined, she says. Sometimes, she challenges clients to complete the actions steps in less time.

"Let’s say, for example, that a client who has told me she or he is a procrastinator is making a plan for a big project and she sets the steps two month apart from each other. I might challenge her or him to make the next move in two weeks."

For those who are high-functioners and overachievers they need support in learning how to "be" other than "do," and hire a life coach so that they can learn "how to smell the roses" while having a fulfilling career, says Magnetti.

Magnetti says she helps them achieve balance by asking "How would it be to do this thing in another way? How would it serve you better to do these things differently? How would it be to try a different way? What would give you more balance at this point in your life, to work 16 hours a day or to find more time for yourself? It’s always (up to the) individual, there is no formula."

Magnetti says she often pushes her clients to stretch their edges and move out of the comfort zone.

Magnetti says she works well with people who are established and have taken care of the basics, but are still missing something.

While the life coaching helps people reach a satisfying level of fulfillment in their lives, a wellness coach helps people deal with health-related issues such as chronic pain, fatigue, stress, weight issues, and more, she says.

Magnetti is starting a weight loss group coaching session Feb. 15, which will be conducted over the telephone to allow for people from different provinces and cities to join in.

She also offers relationship coaching and alignment and corporate coaching.